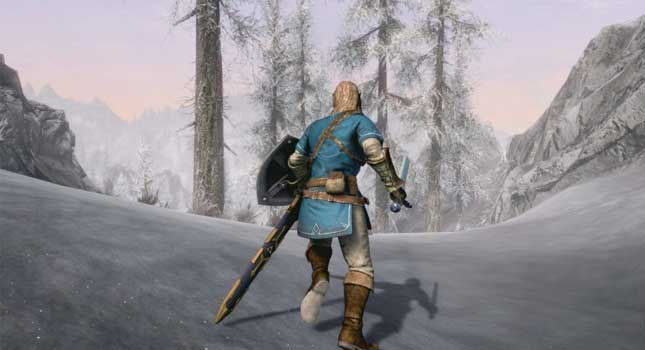 No you’re not dreaming, an Elder Scrolls game is finally coming to a Nintendo console in the form of Skyrim. Not too long after a port to PS4 and Xbox One, the critically acclaimed RPG is on its way to the Switch.

The upcoming release of a big third-party title will excite Switch users, with the console currently lacking in this department. Despite Skyrim being a six year old game, this port will include new features exclusively for the Switch ranging from Joy-Con motion controls to compatible Amiibos.

There is currently no official UK release date for Skyrim on the Switch, however, it has been scheduled for Holiday 2017 so expect the game to be out just in time for Christmas. What better way to spend the holidays than slaying dragons, brewing up a little magic and battling it out with swords and bows. It’ll be like The Legend Of Zelda on mead.

The game will include all of the DLC add-ons on the game disc, giving players more content on top of the hundreds of hours that are already available in the main game, so you might want to bid a fond farewell to your normal everyday life in advance of the release.

Of course, Skyrim on the Switch follows the exact story as seen on other consoles. It is set 200 years after the events of Oblivion in the province of Skyrim. The High King has recently been killed, causing a conflict between two groups, the Stormcloaks and the Imperial Legion, over the fate of the throne.

During this conflict, the ancient evil of dragons is awakened creating yet another threat to the people. Alduin the World-Eater Dragon, the primary antagonist, returns after being lost in time with the motivation of destroying the world.

Players will control a character known as the Dragonborn, who possesses the soul and power of a dragon. The Dragonborn must journey across Skyrim among a civil war to train himself so that he can eventually slay Alduin and bring back stability.

There are hundreds of story quests and side-quests available to players as they progress through the game. Side-quests will reward players with currency, weapons and different abilities. Further quests are available from the three DLC add-ons, with each one telling new interesting stories and rewarding players with more items.

Skyrim is an action RPG which can be played either in first or third person, with a huge open world environment that players can explore freely. Throughout this world, there are many NPCs which can be interacted with in conversation or even combat. They will often give out side-quests, although there’s the opinion of befriending certain NPCs as companions. You can even join a faction such as a band of assassins known as The Dark Brotherhood.

Players can choose the way they want to play with full customisation of their character. They can change appearances and upgrade skills to aquire perks through a level up system. There are also hundreds of weapons, spells and abilities throughout the game at players’ disposal, which can be obtained in a variety of ways.

Exclusively on the Switch, the game can be controlled using Joy-Con motion controls which include aiming bow and arrows, lock picking and melee combat. It seems like using motion melee combat against dragons will be more tense and frantic than ever. Another neat feature is that if players own certain Legend of Zelda related Amiibos, they can use them to obtain special gear and weapons in-game. These include Link’s outfit from Breath Of The Wild and the famous Master Sword.

Switch owners will be happy to know that their edition of Skyrim looks almost identical to its PS4 and Xbox One counterparts. From the trailer, the game looks to run at a decent rate even when taking the Switch portable. The many environments in the world of Skyrim also look stunning with sunbeams and flared lighting on full display.

This port will show off the power that Nintendo’s new console is capable of no matter if you play it on TV or the game pad. It may be a six year old game, but visually it looks almost better than ever on the Switch.

This newest port of Elder Scrolls V will provide Switch gamers with the most unique Skyrim experience yet, thanks to the addition of Joy-Cons motion controls and Amiibo compatibility. One feature lacking at the moment is mods, which were a big selling point for the PS4 and Xbox One versions. It would be a surprise to not see them also appear on the Nintendo Switch.

Despite the potential lack of mods, however, this game is already one of the most anticipated releases for a console which has had a difficult start in terms of third party titles. We can hope that positive sales and reception will help to pave the way for more third party games to be released in the future. Just imagine a Fallout 4 port. Come the holidays, Nintendo fans will risk being absent at their family Christmas parties once they enter the immersive world of Skyrim.