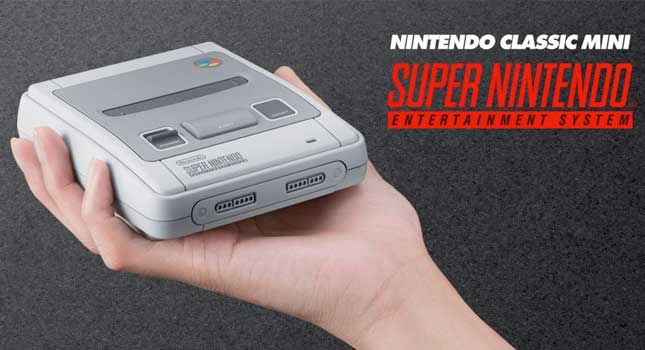 If you’re already struggling to contain your excitement at the prospect of Super Mario Odyssey later this year then the news from Nintendo will be releasing the SNES Classic around the same time will probably make you pop your big bushy moustache off. In addition to announcing the release date, the Japanese gaming giant has also confirmed the 21 games that will be bundled on the mini younger brother to the NES Classic, which came out last year.

The good news keeps on coming when you find out that the games roster includes the glory of Super Mario World, Star Fox 2, Donkey Kong Country, F-Zero, Super Mario Kart and The Legend Of Zelda A Link To The Past, so your thumbs are going to take a pummeling. We’ve already got ours on a strict fitness regime of pushing nails into concrete walls, deflecting bullets and moulding magma in preparation for the gruelling gaming we’re going to put them through when the little bundle of joy arrives.

The SNES Classic Edition UK release date has been confirmed for the 29th September 2017 which will be the same for our gaming counterparts in the US, which is just a month earlier than Mario’s big odyssey on the Switch.

In a move of infinite wisdom, Nintendo has packaged up two designs for the mini console which should keep both British and US 16-bit retro game fans pretty happy. With the design for the US edition of the Super NES Classic looking like the Japanese super family con and the UK and European version looking like the console we all remember, with a little Rick Moranis laser fire thrown in for good measure, you’re all going to get to play the system that will look a lot like the one you fell in love with back in the 1990s.

Game has the console listed for sale at £79.99, which is around £30 more than the NES Mini Classic. With fewer games in the roster this time around and the extra to pay, you’re pretty much forking out for the extra 8-bits and the second controller, but you’re probably worth it, so…

However, maybe the most exciting additions to the gaming roster are titles that didn’t come out in the UK, so for anybody that always wanted to play Super Mario RPG, EarthBound or Final Fantasy III you’ll get your opportunity with the release of the Super NES classic mini.

The full list of 21 games also includes Contra III: The Alien Wars and Super Metroid, so you’ll be able to get your fix of side-scrolling shooter action too.

What’s in the box

The notes from Nintendo confirm that the SNES Classic Edition will include one HDMI cable one USB power cable and two wired Super NES Classic controllers for multiplayer action right from the start. As with the Nintendo Classic Mini NES, the SNES won’t be bundled with an AC adapter to power the unit, however, you will be able to plug it into your TV is USB port to fire it up.