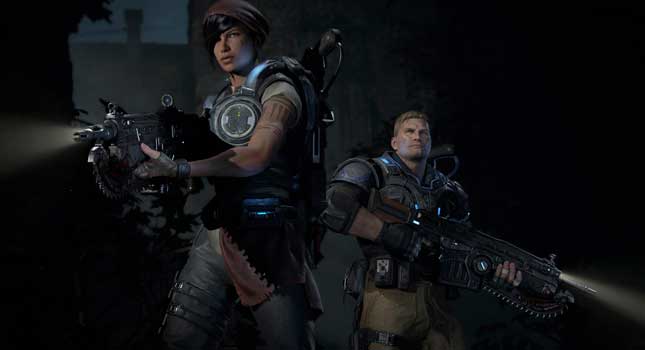 While we’re still tangoing with the glut of great games that have arrived ahead of Christmas 2015, we’ve still got an eye on what next year has got in store for us and looming high up in our Xbox ONE games of 2016 top twenty is Gears Of War 4. We’re still a year away from the release of the game, and we’ll undoubtedly be treated to more action from the title in the summer at E3, but for anyone not up on their gaming radar here’s everything that we know so far.

Developed by The Coalition, which worked on the Ultimate Edition of the first entry in the series, and published by Microsoft Studios, it’s currently down as an Xbox ONE exclusive, but there are a fair few rumours that it might be coming to PC too. It will take the action adventure third-person shooter and bring it right up to date for the eighth generation of gaming and the gameplay trailer below gives us a pretty good idea about what to expect from the title.

Gears Of War 4 will be shouldering its way boldly through the shadows onto the Xbox ONE with a release date planned for winter 2016, which should put the game if your hands around November time. It’s the first new outing for the series on Microsoft’s latest console and should satisfy fans of the series who will have been waiting patiently since 2011 for confirmation that it would be making its way to the new gen console.

The Coalition are keeping fairly tight lipped on the plot of the game, but if the previous three games in the main series are anything to go by there should be a new or resurgent foe for humanity to battle against for survival. The gameplay video below backs this up a little with a team of humans creeping around a deserted township hunting a grim looking monster that turns the tables on them and fights back in numbers.

It’s a direct sequel to Gears Of War 3, so it will pick up after the climactic events that appeared to close the saga of Sera and the battle for humanity against the Locust Horde and the Lambent contagion. With the surface of the planet seemingly swept clean of enemies, we’re expecting a new threat to emerge from deep underground, which has now got free reign following the demist of the Locust.

The third person shooter will see you taking on the role of a Gear soldier with a flashlight for dark corners and a pretty decent arsenal in your kit bag to shoot the slobbering shenizzle out of the beasts that rain havoc in the night. You’ll also have your trusty in-weapon chainsaw to take care of key obstacles that get in your way or to blitz through enemies that are unfortunate enough to get too close for comfort. You can see both of these in action in the video below, which sees the playable character – named JD – cutting down gates and slicing through one of the beats that is attacking your fellow squad member.

You can also see from the video that you’ll have the ability to switch between three weapons and the transition for this change-up is quick enough to be able to go from an assault rifle to a powerful shotgun in a matter or seconds, which comes in pretty handy when a hulking beast is pouncing towards you. The game is just as rooted in the squad attack, cover and fire system that has been at the heart of the series for the last decade and it looks pretty seamless when you see it in action.

Dark, atmospheric and highly detailed environmentally, Gears Of War 4 will obviously be the best looking game in the series to-date. However, the gameplay video below isn’t without its question marks if we’re honest, especially the concept for the close-up shot of the tentacle tongued beast that attacks the Gear squad that’s hunting them. That said, it’s still shaping up to be a stunner with great features like the fog and moonlight, along with some grisly looking beasts, and what looks like gestation pods.

The characters are well rendered with fluid animation and good facial features that are cleverly stylised in the same way the previous games in the series have been. The lighting effects are sharp and feel very lifelike, delivering some nerve jangling imagery as you turn corners with just the beam of your torch to light the way, which we’ve always loved since the horror fright genius of Zombi U.

When it comes to good graphics it’s the little things that count and they’re all looking good here with rippling trees, bushes and surface water in the wind, as well as leaves and debris flying around as the weather turns more extreme. It’s also good at doing the more dramatic atmospheric effects with forked lightning through cloud banks in the skies above the action and striking buildings to collapse them dramatically.

There’s a lot to get excited about in Gears Of War 4, whether you’re an old school fan of the series or a newbie looking to get in on the action on the Xbox ONE in 2016. It’s going to need to reinvent the story line of the series with the closure of the plot to-date in the third game in the series, but with the same great gameplay platform as previous games and the incredible graphics on show in the video below, it’s already got the potential to be in contention for the game of the year 2016 crown.

Share the Gears Of War 4 (2015) UK release date, trailer and gameplay preview with: