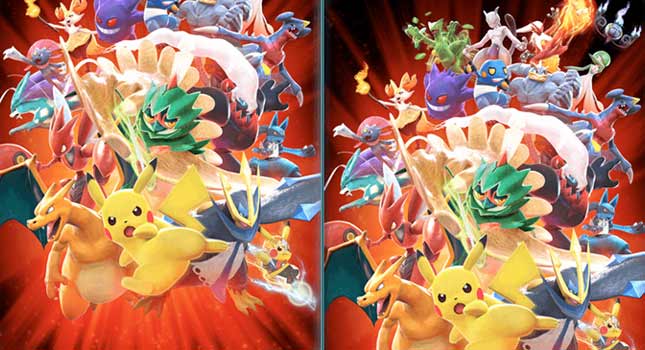 In a relatively short 8-minute Nintendo Direct video (they can be up to an hour long, so be thankful for the shorter trailer we found below), Nintendo has announced its first Pokémon title for the Nintendo Switch, Pokkén Tournament DX. It’s essentially a deluxe version of the previously released title for the Nintendo Wii U, so similar to Mario Kart 8 Deluxe, but with the Switch’s play anywhere capabilities it means you’ll be able to get into the action anytime and anywhere.

If you missed the Wii U title when it was release back in March 2016, it’s essentially a fighting game that sees you scrapping it out with your favourite Pokémon characters. If you think something along the lines of Tekken 7, but with Pikachu, Mewtwo and Charizard as your fighters then you’re not too far away from what to expect from the game. Check out the trailer, release date, gameplay details and character roster below to find out more.

Pokkén Tournament DX has been confirmed for UK release date of 22nd September 2017 which is a Friday, so you’ll have the entire weekend to kickstart the action. While the game is an exclusive for the Nintendo Switch, it is in essence a deluxe version of the Wii U game that came out last year. It’s getting a worldwide release on the same date, so whether you’re a Switch gamer in the US, Canada, Australia, Japan or Lichtenstein, you’ll be able to play the game from the 22nd September.

The gameplay takes place in tournament style arenas and at its simplest, you essentially choose your Pokémon character of choice and battle it out in Single Player mode versus an AI opponent. While the action has some similarities to other fighting games like Tekken 7, there are a few significant differences that make Pokkén Tournament DX a little bit more unique.

There’s the more familair ‘Dual Phase’ where the fighters move within set bounds within the arena, similar to most other fighting game, but then there’s also ‘Field Phase’, where you can move around more dynamically around the wider space, giving you the ability to strafe dodge projectile attacks and get more of a wider view on your attacking options. The Nintendo Switch version of the game also introduces 3-vs-3 team matches if you want to increase the numbers for bigger groups of friends or family.

The game will be a straight up fighting game, but it won’t be quite as technical and involved as the likes of Tekken 7 or Injustice 2, which can be quite complex if you really want to get into the higher skill fighting the games offer. Instead, it will rely on an element of simplicity to even the odds just a little, allowing both serious fighters and less hardened gamers to pick up the game relatively easily.

That’s not to say that it’s been entirely dumbed-down, it’s just that the pickup speed is quicker for younger gamers. There will still be combos and special moves to get to grips with and there’s a strategy element to the game that requires a little grey matter as you’ll need to think about how you approach each fight, as well as relying on your quick fire controller skills. This comes in the form of the Mega Evolutions that you’ll be able to build your way up to and the support Pokémon you can select from within the game to grant everything from special attack and defense capabilities to increased speed and recovery.

The main mode in the game is the Ferrum League, which sees you configuring your character avatar’s gender and appearance before setting out to reach the top of the Ferrum League where you’ll need to face the power of Shadow Mewtwo. You’ll unlock support characters by making it further up the league, as well as new stages to fight in. It’s basically the story mode of the game and you’ll have Ferrum Region local, Nia, to help you to make it to the top.

Either before you take on the Ferrum League, or if you want to brush up on your fight moves and gaming strategies then you can always take some time out in the Pokkén Tournament DX Practice mode. Here you’ll have unlimited time and XP to hone your moves thanks to the Free Training option, but you’ll also have Combo Dojo to work on improving your combo skills, as well as an into to the strategy element of the game in the Action Dojo.

In addition to the Ferrum League and Practice mode, you’ll also be able to take your skills online with Ranked Matches, Friendly Matches that don’t affect your rank and Group Matches, which is the friends-only group battle mode, where you can hook up your own tournament with just your friends.

Perhaps the biggest difference between the Wii U and the upcoming Nintendo Switch version of the game is the additional gameplay options that the Switch creates. For a start you can game anywhere, as well as playing the more tradition home console side of the Switch, but equally, the kick stand means that you’ll also be able to play multi-player matches anywhere too, which you can see in the trailer below. You can seem more from Pokémon with the official Twitter page.

The Wii U version of the game featured 16 playable characters – Blaziken, Braixen, Chandelure, Charizard, Garchompa, Gardevoir, Gengar, Lucario, Machamp, Mewtwo, Pikachu, Pikachu Libre, Sceptile, Shadow Mewtwo, Suicune and Weavile – and they’ll all be back in the Nintendo Switch deluxe version. The good news, though, is that there will also be 5 new Battle Characters in the updated port with the introduction of Croagunk, Empoleon, Darkraiac, Decidueye and Scizor.

As was the case with Mario Kart Deluxe, the graphics have been supped up for Pokkén Tournament DX, and they look pretty impressive, stepping things up from the visuals of the Wii U game. The trailer separates the gameplay video elements a bit too much to be able to really appreciate the crispeness of the graphics, but there are a few fleeting glimpses of the impressive animation and character rendering that has been built into the update. There’s bound to be more to see at E3 next week, so we’ll keep you posted.

This is a great fighting game that perhaps didn’t get as much attention as it deserved when it first arrived on the Wii U. The Nintendo Switch sseems like the perfect home for Pokkén Tournament DX and with the additional characters and new 3-vs-3 game mode there’s even more to look forward to. It may not be the full Nintendo Switch Pokémon game that fans will have been looking forward to, but it’s still going to be a lot of fun to play.