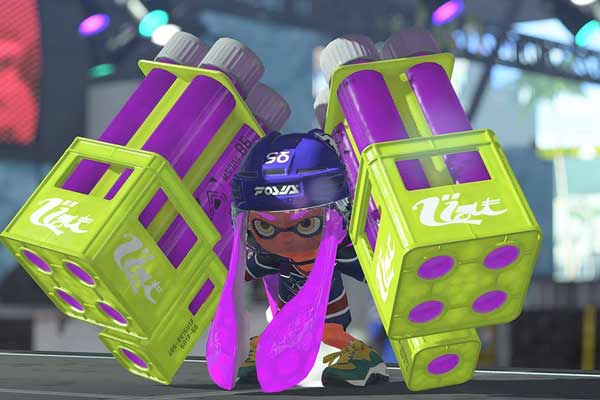 With the recent release of Splatoon 2 for the Nintendo Switch, a lot of gamers will be looking to get better at the online multiplayer fun of the Turf War Rregular Battles. Here are our top 10 tips to help you get started and you can check out the video below to see them being put into action.

1. Focus on laying down paint, not going after the opposition

Keep an eye on your paint counter in the top right hand corner of your screen; if this isn’t going up with every step that you make then you’re probably doing something wrong.

This essentially where 99.9% of all regular battles are won and lost. Lay down as much paint as possible in the middle of any stage and try to splat any enemies that get in your way. It isn’t wise to go looking for confrontations, but you will need to battle it out every now and again to get the upper hand in the middle ground.

3. It’s all about the team win

The win bonus is where you’ll get the majority of your Level XP, so you need to focus on winning as a team, instead of your own stats if you want to level up fast. The final push is probably the most important element of this where you need to check the map and focus on covering as much of the ground as possible.

This might sound like the most obvious of our Splatoon 2 tips, but it’s an incredibly important tip to focus on, because of the amount of time it takes to respawn, which could be better used laying down ink.

5. Pick your locations to jump back into the action

The quick jump to fly into a stage next to one of your teammates is massively useful and often under-utilised other than at respawn, but you need to be careful about where and when you do it. Jump into a clutch of enemies and you’re just going to find yourself back at the respawn point again. When you quick jump you leave a marker where you’re going to land, so it’s an easy tell for enemies to wait to splat you.

6. Sometimes it’s better just to swim from the base

There are plenty of reasons not to quick jump straight after respawn, whether it’s enemy camper you’ll need to flank around or free painting to do close to the base. Check your map to see what’s out there before setting off.

It’s not just enemy campers you can outflank, it’s any opposition team player. If you can work your way around them and get the element of surprise then you’ll get the upper hand. It also counts if you find yourself face to face with an enemy. A sitting target is easy for them to pick off, so make sure you move and shoot.

8. Leave the enemy base alone unless you’re a Splatoon 2 ninja

This is where you’ll get splatted the most, so it’s a good idea to leave it well alone or move fast as you lay down some paint if there’s nowhere else to cover.

Keep your weapon aimed high at all times, whether you’re inking or taking on an opponent. Getting better at Splatoon 2 is all about good hit rates, so keep the crosshairs up.

Tip #9 counts as much for your roller as it does for any of the other weapons because of the splat function. Don’t just try to roll through everyone, especially if they’re facing you down and firing everything that they’ve got. Instead, splat your roller or do a jump splat to cover them in a wave of paint.

If put all of our tips into practice then you should get better at Splatoon 2 pretty quickly. Let us know how you get on.