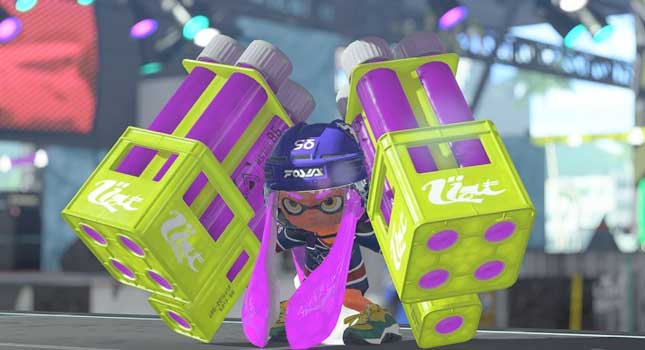 If you’re loving your Nintendo Switch as much as we are, then you probably had your eye on the big games of 2017 with the paint speckled genius of Splatoon 2 being one of the most impressive. With the huge success of the opening game, which introduced a very new kind of online multiplayer shooter to the world, the sequel has gone on to be another fan favourite.

The challenge it had was doing something new to make the game worth getting for anyone that already has Splatoon and while it it doesn’t exactly break the mold again, there’s plenty to keep you entertained. With new stages, new moves and weapons, the introduction of the Salmon Run and more gear than you can every possible brush up on in the sequel, it’s an impressive return that helped to nudge people to make the transition from the Wii U original to the Nintendo Switch follow-up.

The official UK release date for Splatoon 2 was the 21st July 2017, which was announced by Nintendo on its official Twitter page, building on the previously confirmed Summer 2017 marker. For anyone not up on their solstices, that initially put it anywhere between the 21st June and the 22nd September 2017, but Nintendo kept things sooner rather than later, backing up our prediction for July, which was just in time for the school summer holidays.

Ahead of the launch, Nintendo gave Switch owners the opportunity to experience the action in the game during the March 2017 free Splatoon 2 Global Testfire demo event. The Testfire began for gamers in the UK on the 24th March 2017 at 7pm GMT, which meant that you were able to try out the 4-vs-4 online Turf War action from the game before it came out. You needed a Nintendo Switch and a broadband internet connection to get in on the fun and the free demo of the game was available to download ahead of the event from the Nintendo eShop from your console.

There were a few caveats at the time though, as the three day event wasn’t an always-on experience, like gamers are used to with the likes of the recent Ghost Recon Wildlands Open Beta. Instead, there were six sessions over the weekend, each a little under an hour long with the first at 7pm on the 24th March 2017, followed by 3am, 11am and 7pm on the 25th and 4am and 12pm on the 26th. It may have been short lived, but it was a great opportunity to demo the game.

In addition to the Golbal Testfire, Nintendo also held the Splatfest Premiere on the 15th July. It was just under a week ahead of the full launch of the game and you needed to download the Splatoon 2 free demo to play. If you were based in the UK like us then you will have needed a late pass to get in on the action, because it took place between 10pm and 2am.

The third person shooter follows the general mechanics and gameplay features that were introduced in Splatoon. The majority of the gaming takes place in multiplayer arenas as you join a team of four and battle it out with another team to splat as much of the surface area as possible with your ink. The team with the most coverage wins the game.

There are lots of different weapons to choose from, along with a variety of special moves that you can do when you’ve charged up enough power to unleash them. The big N threw in a host of new weapons to bring the Splat-pain to the opposition, including the two-handed Splat Dualies, which double up your shooting with paint pistols in each hand, which you can see in the launch trailer above. They also allow you to do a dodge roll, so you’ll be able to get out of the way of an attack before firing in your own shots.

You will have been able to see them first, along with some of the new arenas, fashion and fanfare in the the Splatoon 2 Global Test Fire.

You can also check out some of the new gameplay features with the sneak peaks in the trailer above, including having much more interaction with the environment than we’ve seen before. You still get to paint and swim up walls and under fences, but there are also ink jets criss-crossing some of the the arenas airways, which you’ll be able to travel across. They come in handy for launching attacks from above, which can help to dish out some big Splat counts. 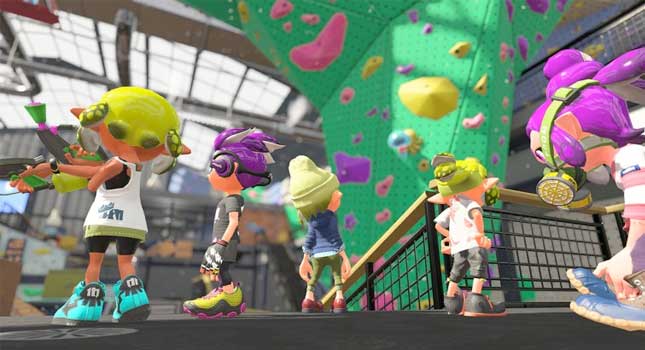 Inklings also have a few more tricks up their sleeves with commando rolls, curling paint bomb Sub weaopons and jet pack Specials that look like they were inspired by Super Mario Sunshine. There’s also another mini one-player adventure fighting a new Octarian attack, as they did in the opening game.

The biggest development, though, is the full local multi-player 4-vs-4 battles to add to the existing online gaming fun. What this means is that you’ll be able to have your own games with friends either with multiple consoles or multiple controllers, instead of just competing against randoms online. This is a solid step up from the Battle Dojo balloon popping antics of the previous game in the series.

In addition to the local multi-player, there’s also limited support for voice chat using Nintendo’s new smart device app. The Switch had a free, limited version of the app available in summer 2017, so it coincided perfectly with the release date for Splatoon 2.

You can see more of the gameplay in action in the video below and there are plenty more to check out here.

The Nintendo Switch may not be the most powerful console on the block, and it’ll have even more of a gulf when Microsoft’s Xbox ONE X arrives, but that doesn’t stop it from delivering beautiful looking games, which is again the case here. Bright, dynamic, fast-paced and crisper than a wafer thin mint, it’s got everything that it needs to impress visually, while also providing a step-up on the original game’s sharp vibrancy. You can see some of the latest graphics stills, fan art and updates on the game on Twitter.

We were a little cagey about the prospect of Splatoon 2, because it really didn’t sound like there was going to be all that much new being added to the game initially. Instead it felt a bit like a similar port up from the Wii U that we had with Mario Kart 8 Deluxe. However, if you take some time to look at the gameplay elements featured in the trailer above you can see that there’s a lot more to it than Nintendo were letting on. We’re not sure why it didn’t shouting more about all the cool new moves, but the end result is one of the finest gaming experiences you’re likely to play.

The Ranked Battle modes are where the long term genius of the game is, but there are plenty of other elements to keep you entertained too with the Turf War genius and Salmon Run fun. The chat feature may not be anywhere near as good as it should be, but it takes little away from what is one of the best games of 2017. Read our full Splatoon 2 review for more detail.