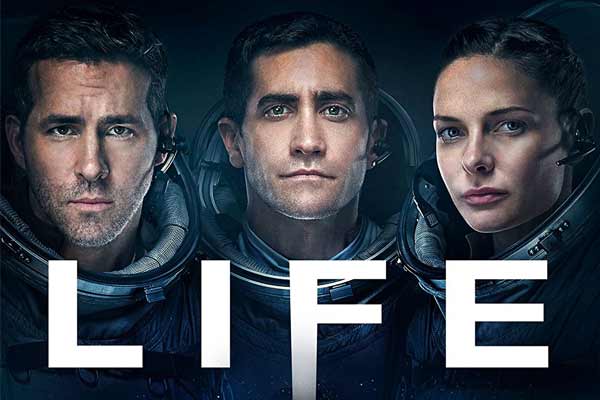 Sci-fi space thriller Life may well be a bit of a rip-off of Aliens, but it does its best to try to be a slightly unique proposition in the end. It isn’t entirely successful in that mission, but at least the effort is there and while the overall story gets a bit muddled at times there are some tense moment to look forward to.

The problem is that they are few and far between, so you spend a lot of the film a little disinterested before being dragged back kicking and screaming by the octopus-like life-form that they discover. The good news is that the alien is realised pretty well with a unique style, dangerous abilities and almost etherial movements in the zero gravity of the International Space Station. However, when you really start to think about how it might have evolved on Mars, especially the way that it moves in space, you start to question the credibility of the creature.

While the story is much closer to earth and our own timeline than the Alien films, the fact remains that there are a lot of similarities between the two in concept. This makes it pretty difficult to appreciate Life as anything other than being directly influenced by the sci-fi space thriller series. Some have even go so far as to call it a bit of a rip-off.

Essentially, a life form is discovered on Mars and is intercepted by the crew of the International Space Station. The lead scientist aboard starts to work on reanimating the creature and when he is eventually successful it awakens thousands of years of evolutionary dominance. When it starts to get bigger it reacts violently when it feels threatened, resulting in a killing machine that will do anything for survival, leaving a lot of destruction in its path.

There are some thrills and bloody spills along the way with a decent amount of action and tense situations. Although, the story jumps a little here and there with random actions not following what you think you’ve just seen, which results in a bit of a mess at times. The dialogue doesn’t help either with clumsy attempts at conversation and emotional connection. You can see the stars of the film trying their best to make it work, but it really doesn’t for large portions of the film.

Ryan Reynolds (Deadpool 2) doesn’t really have much to do for his part in Life, which is a shame because he puts in such a solid performance in Deadpool. There is more of Rebecca Ferguson (The Greatest Showman) and Jake Gyllenhaal (Everest) but their valiant effort’s at credible acting are unpicked by the holes in the dialogue construction.

Visually, there is little to complain about with both stunning CGI, great set designs and impressive zero gravity flight. The angles, camera movement and perspectives used to accentuate the feeling of being in space are very effective, which makes it even more of a shame that the rest of the film doesn’t work out as well as Seamus McGarvey’s cinematography.

Luckily for Life, the story ends a lot better than you will have expected based on everything that has gone before it. However, it still isn’t enough to make it anything other than a throwaway sci-fi thriller and a bit of a letdown from director Daniel Espinosa (Child 44) and writers Rhett Reese and Paul Wernick (Deadpool). Unless you’re a big fan of either Reynolds or Gyllenhaal then this probably isn’t a DVD you’ll want to add to the collection.