The final episode closed out with a couple of cliffhangers for Stranger Things Season 4 Volume I, but the biggest of these has got to be what happened to Nancy. The reality is that The Massacre at Hawkins Lab closed out without a resolution to this, but you can find out more about what went down with the details below.

You can also get our take on what it all means for the last two episodes of Season 4, which will begin in July 2022. On the face of things, you might expect Steve to simply be able to play her favorite song and bring her back pretty quickly.

Advertisement However, its possible that after the first save using this method to bring back Max that Vecna/Henry Creel/001 has learned his lesson. He already knows that his dad Victor managed to elude him, which he says very nearly killed him, so maybe the whole Running Up That Hill thing means he’s more aware of his weakness.

The simple answer is that Nancy will have fallen through and managed to land on her feet somehow, but the scene that we saw before that is of her falling into an Upside Down equivalent of the pool that Barb died in during Stranger Things Season 1. Clearly, Nance has become the latest victim of Vecna and she’s under his spell in the same way that Chrissy was in Episode 1 of Season 4.

Advertisement This means that he’s formed a psychic connection with her that pulls her mind into the Upside Down with him while leaving her body back in the real world in a trance in Max’s trailer. Physically, she’s with Steve and the others, but mentally she’s trapped in the harrowing past with Vecna stalking her.

In the upside down, she sees Barb dead in the pool before 001 in monster form starts to taunt her about the guilt she feels about her friend’s death. The pool then starts to fill up with what appears to be blood, but she climbs out and somehow finds herself in Creel’s lair – his family house that is twisted and broken in the Upside Down.

Advertisement With the clock chiming in the background, she walks down the stairs and Vecna says he saw that she’s been looking for him and that she was close to the truth. Its at this point that you find out that he’s actually Henry Creel and that he killed his mother and sister using his psychic abilities.

The scene intersects with El’s memory challenge as she pieces together what happened at the lab with 001. In her memory, he talks about only being a child when he first experimented with his powers, so he didn’t know his limits.

When El sends him to the Upside Down, probably in a bid to leave her world, he gets transformed into Vecna. The scene doesn’t return to Nancy though, which leads on to the future for Season 4’s remaining two episodes.

If you’re looking to support the site, follow us on Twitter to see more news and updates on upcoming films, TV and games. You can also see additional info on Stranger Things Season 4 in the run up to the release with the official Twitter page at https://twitter.com/stranger_things.

What does it mean for the rest of Stranger Things Season 4?

For us, the biggest point in the final part of Volume I is that 001 says that he didn’t know his limitations when he was just a child. This doesn’t necessarily bode well for Nancy getting as easy an escape as Max did earlier in Season 4.

He’s obviously not a child anymore and if anything it appears as though his time in the upside down have made him even more powerful than when he faced El at the lab. However, he was still unable to stop Max from getting away, which gives us two possibilities for Nancy.

Firstly, you could say that her escape is inevitable. If he couldn’t stop Max from getting away then why should it be any different for Nance. Steve just needs to remember her favorite song – hopefully, Take On Me by A-ha – play it to her and hey presto, her mind gets sent back to her body and she’s free of 001’s clutches.

Advertisement However, the flip side to this is that he might have been surprised by his dad’s escape, reminded of it for Max and prepared for it with Nancy. If that’s the case then Steve and the rest of the gang will need to head back into the Upside Down to save her.

We’re expecting El to be back at her most powerful by this stage, so if she joins the battle then Stranger Things Season 4 will close out with a final confrontation with the new monster in the alternate dimension. There’s bound to be a few surprises on the way, though, so don’t be surprised if things don’t quite work out the way you want them to.

Big characters have died in the past, so we’re not ruling it out for Nancy, but it would be good to have the core group together by the end of Season 4. Either way, we’ll pick things up with her back in the Upside Down for Volume 2 in July and if the trailer is anything to go by then there’s soemthing powerful trapped in a tank that could shake the foundations for them all. Whether this is the Mind Flayer or something new, we’ll have to wait to see. 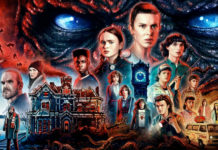