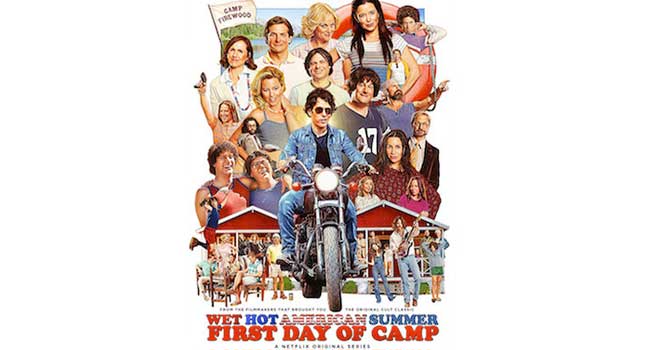 Following up on the 2001 cult comedy movie of (sort of) the same name, Wet Hot American Summer: First Day Of Camp is a solid new comedy series from the Netflixers. With a surprisingly big name cast, who have all reunited for the new series, and some of the stupidest satirical comedy we’ve ever seen, it genuinely needs to be seen to be believed and when you do see it you’ll probably do a lot of laughs.

It’s essentially billed as the prequel to the movie, which is all the more ridiculous considering the fact that the cast were too old for their parts fifteen years ago, but then that’s exactly how the comedy works. It’s its unique ridiculousness that makes the show so funny as it takes things way over the line into the line’s mum’s house to have a bath wearing all its mum’s jewelry and using its kid sister line’s hair brush as a microphone while singing Maniac. Hopefully you get the point, but if not then this is probably not the show for you, or maybe it is and we just don’t get it either. One of those.

There are eight episodes in total available on Netflix and it’s all a part of the online subscription channel’s efforts to originate more TV, which it has had some success at recently with the likes of Daredevil. Moving on to comedy looks like it’s going to be as successful as its Marvel comics adaptations and while it’s not entirely original either, it does work very well.

The story is the first day of Summer Camp at a crazy little place called Camp Firewood, where all of the counselors are nuts and all of the kids are over-exaggerated versions of every child stereotype available. Realistically, the plot, or the series of interlinked story arcs, are sort of irrelevant as it’s always the next gag you’re looking for when watching the show, not how one of the many relationships are panning out or Scooby Do-like episode stories are developing.

The main cast list is enough to watch the series for all by itself. When the 2001 movie was released, Paul Rudd (Ant-Man), Amy Poehler (Inside Out), Bradley Cooper (Guardians Of The Galaxy) and Elizabeth Banks (The Hunger Games: Mockingjay Part II) weren’t the household names they are today. The fact that they’ve all come together in First Day Of Camp is pretty impressive and they’re all hilarious playing some genuinely bizarre characters.

It doesn’t stop there though as it’s also got a fair few new additions to the cast with more cameos and famous recurring characters than the inside of a Hollywood-obsesses stalker’s daydream box. Michael Cera (Scott Pilgrim Vs. The World) plays a weird lawyer, Jason Schwartzman (The Grand Budapest Hotel) plays camp counselor called Greg, Chris Pine (Star Trek: Into Darkness) stars as a former rock legend in hiding, Jon Hamm (Black Mirror: White Christmas) is a killer assassin and Kristen Wiig (Zoolander 2) plays a stuck-up counselor at Camp Tigerclaw. Lake Bell (Man Up) is one of the funniest members of the cast, playing the double dealing Donna, who has some great lines with series creators and writers, Michael Showalter and David Wain, who play camp counselors Coop and Yaron.

The comedy is a deranged and genius mix of inane stupidity, stupid satire and satirical saturation where the follie appears to be satire itself at times. It makes for a lot of laughs along the way and while you can get bogged down in trying to unpeel the target for a lot of the humour, you’re probably better off skimming the surface for the sheer silliness of the show.