In a move of eminent genius, the story of Episode 3 of The Book of Boba Fett saw the lead character getting a huge tribute from the Hutt twins in the form of a new pet monster. If that isn’t enough to get excited about, it sounds like Boba is going to be riding the beast around the place, so here’s everything you need to know about the monster and his potential wider back story from previous Star Wars adventures.

The tribute arrives mid-way through the episode after Boba manages to subdue Wookiee bounty hunter Black Krrsantan, who had been sent to kill him by the Hutt Twins. It took a lot of help to bring the hulking figure down with Boba’s new biker gang and their girl leader doing a lot to save him, along with support from his Gamorrean guards, as well as Fennec Shand.

Advertisement However, they managed to capture Krrsantan and the Twins show up to apologize, giving Fett both the pet monster and the Wookiee as part of their tribute. They also tell him that they’re going to leave the territory to him to avoid war and let him know that there’s another syndicate in town linked to the Mayor of Mos Espa, which leads to the Episode 3 finale reveal of the Pykes as the true enemy.

For anyone not up on their Star Wars knowledge, the pet monster is a Rancor and it replaces the one that Luke Skywalker killed when he was trapped in the pit by Jabba the Hutt. However, there may well be more to this Rancor in particular and you can find out about the prospect of a link to other Star Wars lore in the section below.

Advertisement Rancor’s come from the blood red planet of Dathamir and they’re supposed to be fairly intelligent, which is alluded to by her trainer in The Book of Boba Fett, who says she’s depressed, which surprises the daimyo. The pet’s trainer is played by action movie legend Danny Trejo, who’s been in everything from Predators to Con Air and From Dusk to Dawn.

Don’t forget to follow us on Twitter to see more news and updates on upcoming TV, films, games and more, or to let us know what you think of the character. You can also see additional info on the series with the official Disney+ Twitter page at https://twitter.com/disneyplus.

Advertisement As mentioned above, the first appearance of a Rancor is relatively early on in Star Wars Return of the Jedi. Luke Skywalker is forced to fight one of the beats when he goes to Jabba’s palace to rescue Han Solo. When negotiations turn sour, Jabba drops him into the Rancor pit below the throne room and Luke ends up crushing it to death with a ridiculously fast moving spiked door.

On a side note, we’re not too sure why Luke’s Force powers didn’t alert him to the danger of the drop beneath Jabba’s palace, but then that wouldn’t really make for a great film if he just quietly avoided all anger and beat everyone with ease. Either way, the point is that the Rancor was killed and clearly Luke’s Force powers weren’t quite at their best that day.

The other big appearance for a Rancor is in the first season of The Bad Batch, also on Disney+. In addition to the one that Luke killed, it turns out that Jabba used to own another called Muchi (pictured above), which was taken from him. Bib Fortuna managed to get it back and the monster was his pet in the animated series.

This could in fact turn out to be the same one that Boba gets from the Twins, because the trainer tells him that it’s a female Rancor, which was the same for Muchi. In The Bad Batch, Muchi was left with Bib Fortuna, but she wasn’t in Jabba’s Palace by the time Fett showed up to take over the place, so it could just be a coincidence.

However, it is possible that Fortuna was forced to give Muchi to the Twins in order to retain his control of Tatooine. If that’s the case then this is going to be a nice link between the shows and highlights just how much attention to detail that has gone into the production of The Book of Boba Fett.

It will also continue the link with Fennec Shand, who also appeared in The Bad Batch. She was mentioned in the same episode as the one where Muchi is rescued by Clone Force 99, but she doesn’t see it, so won’t have any knowledge of the Rancor if it is one and the same.

We’ll update things here as more details are confirmed about Boba Fett’s pet Rancor monster. You can also check out our TV news section to see other big releases, or visit the Disney+ website to see more on the show at https://www.disneyplus.com/. 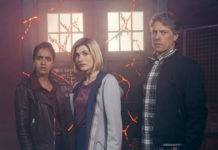