Its been thirteen years since the first film, but finally the Avatar 2 The Way of Water UK release date looks set for 2022. Incredibly, the 2009 hit is still the highest grossing movie of all time, so we’ll be covering the age rating, story and cast for the sequel.

James Cameron has also confirmed that there will be more film in the series. The third is due in 2024 and the rest probably come out in two years intervals. A lot will depend on their success at the box office. But with The Terminator & T2, Aliens and Titanic in his back catalogue, it makes sense to bank on the director to do it again.

Advertisement The story sees us returning to the alien planet of Pandora where we last saw Jake and Neytiri fight off the human attack. The former is now fully transformed into his Na’vi form and what remains of Quaritch’s RDA forces have been banished. However, clearly there is going to be a return for the sequels.

Sam Worthington (Everest) and Zoe Saldana (Avengers Endgame) will inevitably lead the Avatar 2 cast as Jake and Neytiri. They’ll also be joined by Jack Champion. Details about Sigourney Weaver and Stephen Lang returning are still a little vague. The trailer should tell us whether or not Dr. Grace Augustine and Colonel Miles Quaritch are back.

Advertisement Once details are confirmed by the production we’ll update the cast info above.

The 16th December 2022 will be the Avatar 2 UK release date. It’ll be coming out on the same date in North America too and we’re expecting it to be the same internationally. It’s clearly a big shout for the holiday number 1 spot in pretty much every territory. It’ll be interesting to see how well it does compared to the first film.

As things stand, Aquaman 2 will be the biggest competition for the crown with the same release date. However, it’ll be a surprise if two massive films like this decide to go head to head like this. It’s possible that one or the other might reschedule before holiday 2022 comes around.

Advertisement It should come out on digital, DVD and Blu-ray in the UK just in time for Easter 2023 if you track forward from its big screen run. It’s essentially going to be this year’s equivalent to Spider-Man No Way Home if you follow the form book.

Don’t forget to follow us on Twitter by the way. You can see more news and updates on upcoming film releases. You can also visit the official Twitter page at twitter.com/officialavatar for more on the sequel in the run up to the release.

The official Avatar 2 The Way of Water UK age rating will be confirmed by the British Board of Film Classification (BBFC) a few weeks before the release date. However, we can look at the first film, which had a 12 certificate. In North America it was a PG-13 film, so similar to the UK. Both act as a good guide for the second film in the growing series.

We should see the same kind of moderate violence and intense battles again. However, the sequel is going to need to reset things a little, so it might be a little less full-on. We’ll know more when the trailer comes out.

We’ll update you with more details on the film as they get confirmed. To keep tabs on the latest upcoming films you can also check out our movie news section. Alternatively, visit the official website at www.avatar.com/.

As with the age rating, the runtime for Avater 2 will only be confirmed in the build up to the release date. The first film was 2 hours and 42 minutes long and we’ll be surprised if the follow-up is any shorter. 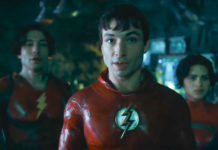