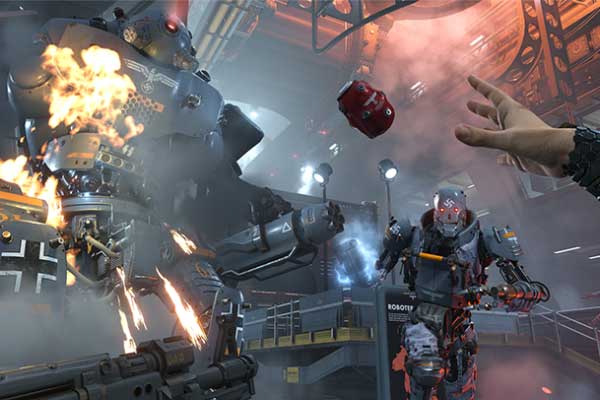 Bethesda Softworks are unrelenting at the moment in terms of gaming good news and the latest is the second gameplay trailer for Wolfenstein II: The New Colossus, which is looking like it’s going to be a whole lot of fun. It adds to the exciting news that the game will also be making its way to the Nintendo Switch in 2018 following on from its first port to the hybrid console with Doom in Christmas 2017.

The trailer features a fair few cinematic cut scenes as the characters talk through their intentions to stir up a second American revolution to fight back against he Nazi overlords that are in charge in this alternate reality 1961. However, the lion’s share of the action is dedicated to actual gameplay and it’s looking like it’s going to be an unrelenting blitzkrieg of intense first person shooter fun.

There’s a bit of tongue in cheek humour to the delivery of the trailer, which will undoubtedly feed through into the game itself, with as much dark satire as there are FPS kill streaks. There’s obviously going to be a lot of serious intensity with brutal take-downs and savage killings as you make your way through the game, but its all done with a certain level of devil-may-care over-the-top joie de vivre, in a perverse sort of way.

William “B.J.” Blazkowicz has clearly got a lot of fight left in him despite the injuries he suffered from his previous Nazi-fighting adventure. From the look of the second gameplay trailer he’ll have more incredible arsenal in his kit bag to dish out the kind of unrelenting destruction you won’t see anywhere else. From sliding shotgun doubles to plasma gun blasts, fire cannons, his mechanised stilts and the fury of Liesel, there’s going to be a whole lot of firepower and tech under the hood of The New Colossus.

The Nazi war machine has also developed even further since the previous game with a whole host of terrifying mechanical beasts at its mercy to rain havoc on any slight notions of insurgency. They’ve got huge armoured attack suits, Terminator-like robots and killer flame throwing dogs, so you should expect a crazy mad world to take by storm in one of the most surreal escapist entertainment titles you’re likely to play.

The trailer also sets up a little anticipation for the story with references to an overblown plan that has been cooked up by the resistance to instigate the second American revolution. There’s also talk of a nuke in a fire hose, so clearly things are going to get pretty messed-up before the end credits roll in Wolfenstein II.

It’s a shame that Nintendo switch owners are going to have to wait until 2018 to give the game a blast themselves, but in all fairness, it’s just impressive that it’s getting the third-party title at all following the drought of games in the Wii U.