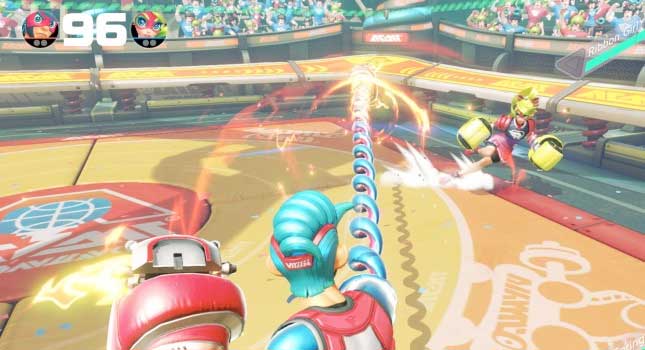 While we’re crazy excited about the prospect of playing The Legend Of Zelda: Breath Of The Wild and 1-2-Switch looks like it could be a lot of fun, it’s fair to say that the launch titles for the Nintendo Switch are a little thin on the ground. However, there are a few releases in the coming months after the 3rd March 2017 that are worth getting hyped for and one of the best looking new titles on the agenda is boxercise on overdrive sports sim, Arms.

Imagine the boxing game in Wii Sports and throw in a bag of nuts, half a pound of bananas, a truck load of Slinkies, two Pepperamis and a can of Lilt and you’re not too far away from this game. It’s essentially a multiplayer Boxing fight sim, but you’ve only got to take a quick look at the trailer below to see that it’s a whole lot crazier than a box of kangaroos.

Arms has been confirmed for a UK release date of the 16th June 2017, which is a little later than the initial Spring/Easter timeline we’d initially been given. It’s been a while since Mario Kart 8 Deluxe touched down, so Nintendo Switch gamers will be crying out for a new title by the time the power punch game comes out.

The game is controlled with the two Joy Cons held in either hand as you simulate your best fighting stance. You’ll then face off against all manner of opposition and swing your meathooks in a bid to take them down. The big difference, though, is that your fists are at the end of extendable arms, so instead of having a close quarters reach, you can actually connect a punch from a way back.

Fortunately, you’re not just a sitting target, as you can jump and dash, as well as dodging and weaving, in an attempt to get out of the way of a hit. These moves will also come in handy as you vie for position to land your own shot against a fast moving opponent. You’ll also be able to string them together to increase your chances of a win with the likes of a dash dodge duck hook shot or a jumping power jab.

However, if you give your Joy Con a twist in mid-flight then you can also mix things up with swirve shots that bend your punches, either to catch your opponent off guard, or to punch around an object in the arena. If you find yourself on the receiving end of one of these, but can’t move out of the way fast enough, there’s also a block move in your kit back, so there’s a fair amount of flexibility to the game.

To move around the arena, you just tilt the Joy Cons left and right or forward and back. Dashing uses the same motion, but with the press of the L button, and jumping is performed by pressing the R button, so despite the fact that you’ve got a fair few options, the gameplay is a controlled with some basic, intuitive moves. It’s a similar story with the block move, which you can do by simply drawing you arms across you chest in a blocking move.

If that isn’t enough action, Arms also comes with both a grab move, as well as special moves, which can really help to whittle down you enemy’s health bar. If you flick out both fists with the Joy Con and connect, then you grab your opponent Scorpion-style, draw them in close and unleash a series of combo punches. The special moves, on the other arm, are unlocked when you charge up the power meter and you can unleash a flurry of super-powered punches.

You start the game by choosing your fighter from the roster with Spring Man and Ribbon Girl acting as the basic variants in the ranks. There’s also the big beast Master Mummy, whippet fast Ninjara and the robotic Mechanica. We’re pretty sure that there will be more characters announced before the release date, but they’re the five that feature in the demo.

Once you’ve chosen your fighter, you’ll have a the ability to customise each of their punching arms with different weapons, ranging a toaster to a boomerang fist. While that sounds like a blast in itself, it’s one of the key strategic elements of the game as there’s a certain amount of rock-paper-scissors to the way each customisation works against another opponents selected fist-based weapon. Choose wrong and you’ll have an uphill struggle, but get it right and you’ll be green-lit to knockout glory.

As with everything Nintendo Switch-related, Arms has a fair few options for gaming. You can play it from the comfort of your home either against the computer, vs. another player with a second set of Joy Cons or with online multiplayer. You can play it out and about with the kick stand flipped in table-top mode, again either on your own against the computer or with online multiplayer with a wifi connection, or vs. another player with their own Joy Cons, or with another player with their own Nintendo Switch using the local wireless connection. Essentially, there are a lot of options for going tow-to-toe in the game.

The game looks crisp, beautifully animated and a decent step up from anything we’ve ever scene on the Wii U. The styling is cartoon-based, but without looking too dumbed down. It may not be hyper-realistic, but it looks impressive enough with a lot of high speed movement and bright colours to deal with. The arenas that we’ve seen to-date a cool enough, but hopefully there’s a fair few more epic stadiums waiting in the wings for the release date to land.

We can’t wait for Arms to land later this year. We’ve always been big fans of Nintendo’s boxing games going all the way back to Punch Out back in the 1980s. Boxing on Wii Sports was a lot of fun and pretty sweaty from a workout point of view and this looks like it’s going to take that concept and throw the kitchen sink at it. The big question is how much replay value there is in the game. If it turns out to be as intuitive as it looks to play and the online multiplayer is as intense as it could be then it might be on to a winner. You can see more from Arms on Nintendo’s Twitter page and you can get involved in the conversation with our Nintendo Switch community on Google Plus.

Share the Arms UK release date, trailer and gameplay details for the Nintendo Switch with: