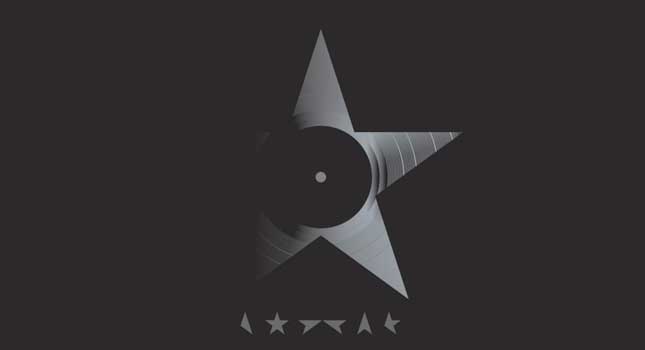 David Bowie will be firing up his rocket ship once again in 2016 with his 25th studio album, Blackstar, but while the name indicates a nod to the past, the music is shaping up to be a bit more in the way of new directions for the ground controller. It follows up on the success of his previous outing, The Next Day, in 2013 confirming that he’s just as focuses on new music now as he was when he first descended to the top of the charts in the 1960s.

The new material may not be as prolific as his last album with just seven tracks compared to fourteen on The Next Day, but it comes with no less anticipation as the Star Child remains as popular today as ever. It has been confirmed for a release date of the 8th January 2016 and will be available on digital download, CD and vinyl with the latter sporting the coolest artwork of the set, which you can see for yourself in the image at the top of the page. There’s also a limited availability of some pretty impressive lithograph artwork prints from the David Bowie Parlaphone store.

Ahead of the release, he’s already released a couple of tracks from the album to give us a taste of what to expect from his latest record. The first of these is the title track, Blackstar, which kicks the album off with more than nine minutes of meandering craziness that kicks out an eclectic range of music that touches on everything from Eno inspired electro to Django Django-like North African percussion with oboe melodies in between. It’s an austere space opera of a track that will undoubtedly struggle to connect instantly with a mainstream audience, but offers a lot for the more dedicated music lover out there. You can listen to it yourself below with the equally surreal music video.

The video blurs sci-fi and space exploration with Gothic fantasy, vague traces of horror, religious symbolism and indoctrination, Maoist social visual inculcation, modern dance, cult crossover, painting, sexual entanglement, mumbo jumbo and stuttering camera effects. There’s a lot to take in, but it makes for an intoxicating accompaniment to the song, which has been featured in new TV series, The Last Panthers, which was directed by Johan Renck, who did the same honours for the music video below.

Only the audio is out for Lazurus, the second track released ahead of the album, but the video will be premiering a day ahead of the launch day for the record. It’s a lot more approachable, but still not quite rooted in the various popular Bowie guises we’ve seen over the years. However, it does feel like a direct continuation of The Next Day with sparse Germanic formation and death knell musings. Vocals are strong as he sings about heaven, blue birds and freedom, “aint that just like me”, and they’re accompanied by yet more unconventional focus for wind instruments, this time bringing the clarinet out from the cold, where it’s been, in pop music terms, since Jack White’s Blunderbuss.

The release date for the Blackstar has been planned to coincide with Ziggy’s birthday, when he’ll be high kicking his way into the glory of being 69 dude, to quote the Wild Stallions. The first couple of tracks have done more than enough to kick us into gear ahead of the release and we’re looking forward to listening to the remaining six songs, following up on the might of the last album. If missed the 2013 outing, you can catch up a little with out review of The Next Day.