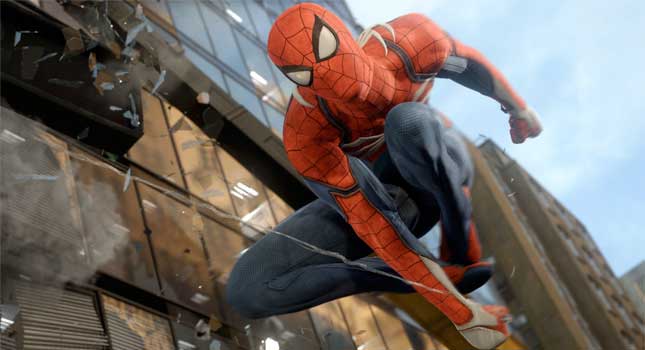 Superhero games have been hit and miss over the years, but there’s a lot of buzz about the prospect of Marvel’s Spider-Man PS4, which was initially announced at E3 2016. Games like Batman: The Arkham Knight have set the bar high for open-world superhero adventures and while the cinematic launch trailer shows a lot of promise, the pressure is on for developers Insomniac Games to deliver something special. You can check out the launch trailer, along with the latest information we have on the UK release date, story details and gameplay below.

The game is a PlayStation 4 exclusive, which puts it smack bang in the centre of the media’s attention as it will be one of Sony’s unique selling points in 2018. The console wars have always been influenced by exclusive titles and Spider-Man is one of the biggest upcoming releases, along with Days Gone, The Last Of Us Part II and God Of War, which could see a further tilt in the direction of the PS4. With Xbox ONE‘s exclusivity null and void thanks to Microsoft’s decision to port Xbox releases onto Windows Gaming, it could be a big deciding factor going forward.

The Spider-Man PS4 UK release date has now been confirmed for September 7th, 2018. The launch details were released with a new video featuring all of the pre-order content, which includes the Spider-Man punk suit, two additional constumes, early access to the drone gadget and 5 skill points. With the release of the gameplay trailer at E3 2017 and the increasing amount of gameplay content that we’ve seen, it’s clear that Insomniac Games is close to completing the title. However, there’s no word on any beta access as of yet

The plot for the single-player adventure is apparently unlike any Spider-Man story we’ve seen at the movies, transitioning to a slightly older, wiser and more experienced Peter Parker, who’s got a number of years under his belt fighting crime in New York City. Juggling his professional life as a photographer with his relationship woes is tough enough, but when you’ve also got to save the city from some seriously nasty crooks and supervillains it means you’ve got to hone your skills to perfection and its this Peter Parker you’ll be taking control of.

There’s no word as of yet in terms of who the main antagonist will be, but we’re expecting there to be an overall ringleader, as well as a number of appearances from other baddies in the Spider-Man canon. Our favourite is Doctor Octopus, but there’s a long history of the Green Goblin being the main man on the scene. However, there’s also the possibility of the King Pin being at the heart of it all following on from the success of Daredevil on Netflix, starring the brilliant Vincent D’Onoforio.

Wilson Fisk features in the gameplay video, so he’s definitely in the mix, but they’re clearly leaving things open in terms of the main antagonist. There’s also an appearance for Martin Lee, AKA Mister Negative, but whether he’ll be Spidey’s main opposition or just one of many is unclear.

From what PlayStation, Insomniac Games and Marvel are saying about the game, we’re essentially getting an open-world New York City to roam around in with a hyper-skilled Spider-Man to control. This will give you all of Spidey’s wall climbing, web swinging and sky diving skills to get around the city with.

From the look of the gameplay trailer, it will be a bit like a cross between Assassin’s Creed Syndicate and Batman: Arkham Knight in terms of the speed you’ll be able to move from rooftop to rooftop. With the Big Apple to roam around in, it could be one hell of a lot of fun just exploring the iconic landmarks that will feature.

You’ll also be pretty fly with Parkour and have the ability to utilise elements of the environment for travel and combat, which ties in even more with the Assassin’s Creed comparison. However, with Spider-Man’s unique web firing capabilities it should feel much more unique than it sounds on paper, especially with his advanced acrobatics and spectacular aerial movement.

The combat engine is sophisticated with a lot of dynamic moves in Spidey’s action-packed arsenal. You can see him using his webs as slingshots, catapults and to give him momentum for flying kicks in the video below, but that’s just the tip of the iceberg with the addition of “blockbuster set pieces”, running up walls, a lot of tech and variety to your web shooters and incredible environmental interaction that provides a lot of scope for improvisation.

The teaser trailer didn’t actually show in-game graphics, but the release of the gameplay trailer gave us our first taste of what to expect fromt eh visuals in Spider-Man PS4. We’d been expecting something very special and the game looks like its going to deliver on that as one of PlayStation’s big exclusive titles for 2018.

It’s clearly had the attention it needs to deliver eye-candy quality to impress gamers in the modern era. With 4K gaming as the future for the industry, titles need to be pushing the boundaries of graphics capabilities and that appears to be the case with the upcoming release.

You can follow Insomniac Games on its official Twitter Page to see more from the game as it comes out and we’ll be updating the details on the graphics, gameplay and release date as they arrive.

Everything is looking fairly positive for the PS4 exclusive at the moment and we’re looking forward to the UK release date coming around. The Spider-Man gameplay footage strings things together beautifully and teases a little of the plot to give us a hint of what’s to come. If it can get anywhere near the experience that Batman: Arkham Knight delivered, with Spider-Man as the lead character and a well-crafted open world New York as your playground, then it could be genius when the release date finally comes around.

Thankfully, the realisation of Spider-Man in the game has taken a significant direction change from that of the various movie outings we’ve had over the years. While Spider-Man: Homecoming is shaping up well enough, the idea of being a more experienced Spidey looks very cool. If the travel and combat mechanisms are as slick as they look in the gameplay trailer then it’s going to be hard to fault.

The last game featuring the Webbed Slinger was 2014’s The Amazing Spider-Man 2, which had more of a multi-platform release, available on Microsoft Windows, Nintendo 3DS, PlayStation 3, PlayStation 4, Wii U, Xbox 360 and Xbox One. However, reviews were fairly middle of the road, so hopefully Spider-Man PS4 doesn’t fall foul of the same poor delivery.