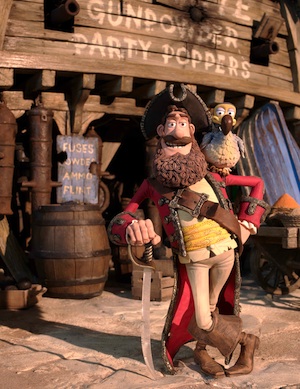 For anyone that missed it at the cinema, Aardman Productions’ The Pirates! In an Adventure with Scientists is scheduled for release on DVD and Blu-ray this September (2012). With their original home being the small screen, the latest movie from the guys that gifted the world with Wallace and Gromit should work well from the comfort of the sofa on a rainy day in Autumn.

The story follows the Pirate Captain, played by Hugh Grant, as he marauds the high seas in search of treasure to back-up his chances of winning the pirate of the year contest. His competition is fierce though and he must give up his obsession with pork related feasts and take his pirating captain role seriously if he’s to match the bejewelled wealth of fellow pirates, Cutlass Liz (Salma Hayek), Black Bellamy (Jeremy Piven), and Peg Leg Hastings (Lenny Henry).

However, in the process of attacking Charles Darwin (David Tennant) on his Beagle ship, Pirate Captain manages to embroil himself and his crew in a madcap plan to win the Scientist of the Year Competition to bring him the riches he needs to be named Pirate of the Year. Off to the smog of Victorian London, the pirates come up against the apparent skulduggery of both Queen Victoria (Imelda Staunton) and the scheming Darwin.

As with previous Aardman brilliance, Pirates! In An Adventure With Scientists enlists the class of stop-motion animation, delivering a stunning seafaring voyage with plasticine and painstakingly minuscule movements that would have taken them years to produce. The stop-motion animation is also backed up with CGI to give Pirates! the special FX movie might to bring the storyline to life in vivid detail. With the new direction into computer animation thanks to last year’s Arthur Christmas, Aardman Productions are looking pretty versatile these days.

The Prates! In an Adventure with Scientists DVD includes a Filmmakers’ Commentary, Mr. Bobo’s Flash Card Challenge, a feature on the stop motion animation that went into making the film, a short video looking at the making of a chase sequence in the film and a DVD Rom link to more pirating fun online. The Blu-ray version includes all of these, as well as a pirate costume game.

Prates! In an Adventure with Scientists is scheduled for release on DVD and Blu-ray on the 10th September 2012.