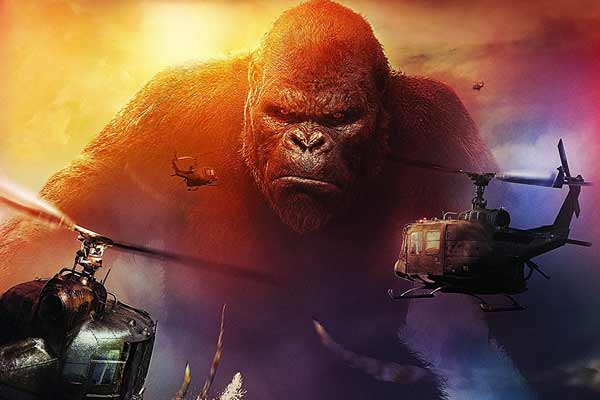 Kong: Skull Island made its way to DVD, Blu-ray and digital rental this week, and while it’s definitely a film that worked best at the cinema, it’s still a decent monster movie. It’s as big as its namesake, and not just because of the oversized gorilla marauding Skull Island; it holds an incisive mirror on humanity and war, as well as delivering some huge scale action sequences and CGI brilliance, so it goes beyond what you might expect.

The story is a smart adaptation of the King Kong plot that we all know and love and while it starts out with the same discovery of a huge ape on a remote island, it delivers the entirety of the film in the thick of the jungle setting. Where the original transported the action to the skyline of New York, Skull Island sees him ruling the roost on his own backyard, which makes the film much less familiar and all the more interesting.

The characters that it introduces are pretty strong giving the big name actors involved decent roles to fill. Things start off with John Goodman’s character who is the driving force behind Monarch, an organisation determined to prove the existence of super-size creatures like King Kong.

When he manages to secure funding for an expedition to a recently discovered uncharted island in the South Pacific called Skull Island, he ropes together a crack team to assist him. It includes US Army Lieutenant Colonel Packard, played by Samuel L. Jackson (Avengers: Infinity War), jungle tracker and former British Special Forces officer James Conrad, played by Tom Hiddleston (Thor: Ragnorak), and Time photojournalist Mason Weaver, played by Brie Larson (Captain Marvel). Together they all head out on a crazy mission to the island without getting too much in the way of background information. Obviously, it doesn’t take long for them to get a taste of what they’ve got themselves into.

The setting of the film during the 1970s in the aftermath of the Vietnam War is one of the smartest developments in the plot as it manages to tie in a clever critique on warfare and some interesting points about the way in which enemies can be created from nothing. It also gives Kong a sense of timelessness, which combines with the wild setting the team find themselves in on the island.

John Goodman (Atomic Blonde) always brings a certain amount of stability to anything he’s in and that’s the case with Kong: Skull Island as he helps to ground the film despite its otherwise outsized form. Toby Kebbell (War For The Planet Of The Apes) does a similar job as Major Jack Chapman, but he doesn’t really feature enough in the film to have all that much impact.

Samuel L. Jackson builds on the bedrock of this with his relentless determination as Lieutenant Colonel Packard, who will stop at nothing to avenge the men he loses. However, as ever the real enemy lies within, both psychologically and literally where Kong: Skull Island is concerned, because the giant ape isn’t the only super massive creature roaming the land. The introduction of the dinosaur-like Skull Walkers that come up from underground tunnels is a clever twist and helps the film to tap into questions of humanity with Kong’s battle with them and the discovery of what it has cost him.

Brie Larson’s Mason Weaver acts as the fulcrum for the giant ape’s softer side, taking on a slightly altered, but similar bridging role as Fay Wray’s Ann Darrow in the 1933 original. This time, Kong is portrayed as being much more complex and it’s one of the best new developments for the character in years.

Tom Huddleston is pretty much the all action hero in the film and he doesn’t really have too much other than that to do. Although, in all fairness, Brie Larson gets just as much action heroics, so it’s got decent balance from that point of view.

John C. Reilly (The Lobster) is pretty funny as castaway islander Hank Marlow, but the real star of the show is Terry Notary, who performs the movement for King Kong. He isn’t quite as impressive as he is in War For The Planet Of The Apes, or The Square, but this is a little different as he’s creating a unique creature instead of recreating an animal that he can ape, but he still has a huge impact on the strength of the film.

This is obviously supported by some epic special effects to deliver the overall look of Kong and the rest of the creatures on Skull Island. There is also some well-crafted set constructions and make-up to contribute even more to the overall look and feel of the film, which is very strong.

It gets taken to the next level with great atmospherics, which director of photography Larry Fong uses to amazing effect. Perspective is always a big part of the cinematography for King Kong films, but it’s the close-up portraiture that really draws out the story to create the bridge between nature and humanity. A close up of Brie Larson or Samuel L. Jackson is followed up by one of Kong to act like a mirror and it works very well within the film.

Kong: Skull Island may not be seminal, but it is an entertaining monster movie that goes way beyond the narrower confines of the genre. It looks great, so definitely benefits from the higher resolution of Blu-ray over the DVD release, but either way you’ll want to see this on as big a screen as possible.

Share our review of the Kong: Skull Island DVD with: