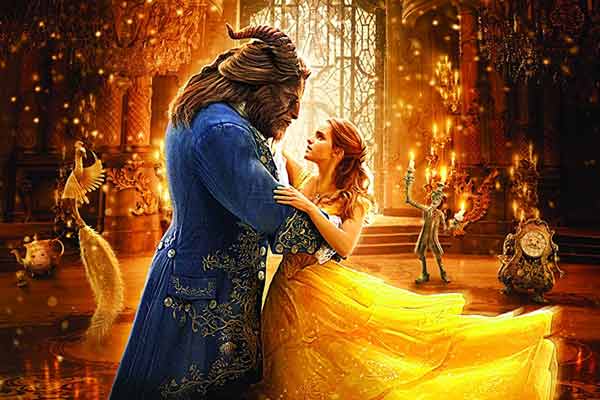 While there are a few positive elements to the recent live action adaptation of Beauty And The Beast, the reality is that it doesn’t quite stand up to the brilliance of the 90s Disney animation. The first half of the film in particular is pretty much a slow-paced retread of the very same steps from the first film, and though things pick up in the latter half, with more new additions and unique individual performances, it’s still overshadowed by the faultless delivery of the original.

The story itself is exactly the same as its predecessor, but it’s fun to see it replayed with live action and CGI special effects, especially when it gets into its stride. The pace is all off for the first hour of the film with a lot of slack in every section – even the action sequences are slowed down or overfilled unnecessarily. Things don’t really start to pick up until the wolf scene turning-point half way through and from that moment on it’s a much tighter delivery that draws you into the characters once again.

The minor new additions to the plot, including Belle’s mother and start in life in Paris, are well crafted and fit well within the overall story. The build-up of Gaston’s duplicity is a nice flourish that creates added intensity for the great battle at the castle and the little tweaks to Belle and the Beast’s developing relationship is well constructed.

The celebratory ending is overcooked by approximately 2,000 degrees Celsius, taking things way too far over-the-top to be anywhere near credible. However, the reveal of the real people behind the cursed castle characters we’d seen through the rest of the film is a lot of fun and while some of the stars seem juxtaposed visually to their voice performances, it reiterates how good a job they did taking on such well-known characters.

Emma Watson’s (My Week With Marilyn) performance as Belle drives the entire film, as she’s pretty much the focal point throughout and while she doesn’t look much like the Belle in the animated classic, you can’t deny her acting skills to evoke the character in other ways. She has strong on-screen chemistry with the Beast, which is no easy feat with a CGI creation, and Dan Stevens (Downton Abbey) does a very solid job of voicing the role.

The rest of the cast is pretty impressive too with Luke Evans (The Girl On The Train) and Josh Gad (Murder On The Orient Express) nailing Gaston and LeFou with performances that are at least equal to those of the 1991 animation. Gad camps things up brilliantly with a lot of great comedy timing and not-so-subtle facial features that help to bring the character to life and it works very well next to Evans’ cruel and preening power peacock interpretation of Gaston.

The name check for all of the magical characters in the castle is pretty impressive and they’re all strong in their roles. Emma Thomson (Alone In Berlin) does some exceptional voice work as Mrs. Potts and while she doesn’t necessarily look the part when the transformation arrives, it doesn’t take too much away from her overall impact. Especially with the likes of Ewan McGregor (Fargo Season 3) as Lumière, Sir Ian McKellen (X-Men: Days Of Future Past) as Cogsworth and Stanley Tucci (Transformers: Age Of Extinction) as Maestro Cadenza, all of whom deliver incredible character adaptations.

Plumette, Lumière’s duster lady friend, has a bigger part in the film and she’s brought to life by the brilliant Gugu Mbatha-Raw (God Particle). Audra McDonald is pretty funny as Madame de Garderobe, Nathan Mack lands Chip perfectly and Hattie Morahan (Alice Through The Looking Glass) has a lot of presence as as Agathe, the mystical enchantress that casts the spell over the Prince and the castle. Kevin Kline (Bob’s Burgers) is probably the only question mark in the film with a much-changed slant on Belle’s father Maurice, but it’s more different than wrong.

Visually, Beauty And The Beast (2017) is stunning, with incredible CGI, epic set construction and stunning costumes and makeup. You could spend hours freezing frames and pouring over the phenomenal detail and production values in every shot, which is helped by some very skilful cinematography from director of photography Tobias A. Schliessler (A Wrinkle In Time).

Beauty And The Beast (2017) was always going to have a tough task for director Bill Condon (The Greatest Showman) with such a close replication of the animated film, but he pulls it all together well enough and salvages the film is the final half. The performances from the cast help to make the film work in the end and the visuals are enough to make the digital rental worth a watch in the very least, but for Disney fans this is another film for the DVD collection.

Share our review of the Beauty And The Beast DVD with: