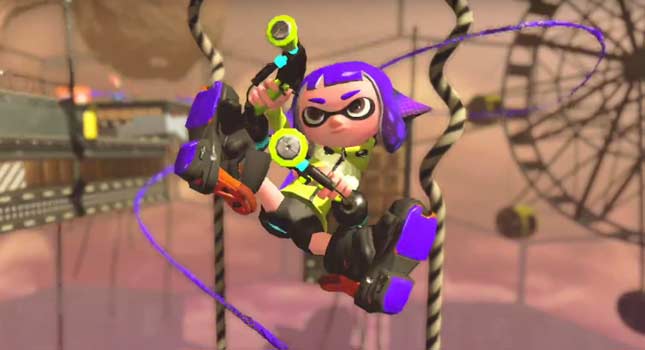 Along with a 20-minute long feature on upcoming fighter Arms, the latest Nintendo Direct video also came with this shiny new Splatoon 2 single player campaign gameplay trailer. The success of the original game may well have been largely due to the fun and excitement of the online mode, but it definitely looks like the sequel will be making more of the single player action to support it.

With what we’ve already seen from the multiplayer gameplay action, and from the looks of things in the new trailer, Nintendo is clearly throwing the kitchen sink at the ink-splitting shooter sequel. You can check out the trailer below to see it for yourself.

The first thing that you get a sense of from the trailer is the impressive improvements the game has made in terms of graphics. Splatoon was a good looking game in itself, but the sequel appears to be a big step up visually. It’s still as colourful and fun as ever before, but the graphics are incredibly crisp with fine-tuned detail and intricate courses to explore as you battle it out with the Octarians.

Marie is on hand for some funny chat at the start of the trailer, but the most impressive part of the video is the huge bosses that feature. There’s giant unicycle-riding monsters, pop-out mechanised destroyers and killer blocks that try to fall on you from above, so we’re expecting it to be a much bigger campaign than that of the original.

The gaming environments for the single player campaign look pretty cool too, with the precarious tightrope runs, roller blocks and various obstacles to make it past. There’s a sweeping intricacy to the mayhem in the video, which also back up the prospect of a large single player mode.

The freaky Octarians have got a lot of messed-up kit to fire at you with giants missiles, paint cannons and ink bombs in their arsenal. It’ll be up to you to take them all out and stop them from wreaking havoc in the plaza.

Luckily, you’ll have a little help from Sheldon along the way who will be kitting you out with the latest in ink-based firepower. We’re expecting the levels in the single player campaign to get progressively harder as you go, so the addition of new tech from Sheldon will come as a welcome relief as you’re mowing down the Octarians scourge.

Splatoon 2 has been confirmed for a UK release date of the 21st of July 2017 and while the majority of players will be looking forward to the online multiplayer the most, the new trailer shows a lot of promise for the single player campaign. All-in-all, the game is looking pretty sharp taking the innovative concept of the original game and firing in even more fun.

The release of the game should give the Nintendo Switch a little boost in sales over the summer as it adds to the other big name titles in its catalogue like The Legend Of Zelda: Breath Of The Wild, Mario Kart 8 Deluxe and Arms.