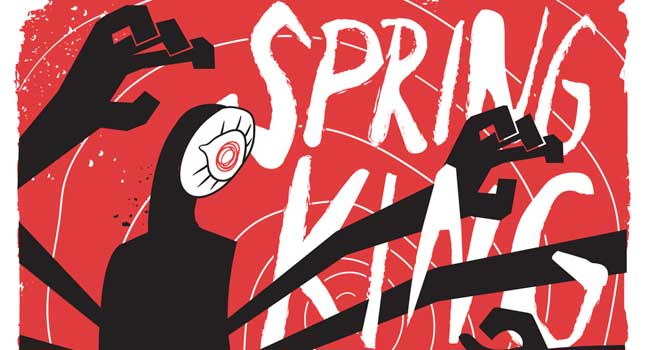 Post-punk Machunian mad men make up the four-piece band that is Spring King and they’ll be hitting the road in May for the lion’s share of their remaining UK gigs this year. The new tour dates come on the back of the recent release of their latest single, Rectifier, as the band builds pace and material in advance of the full record release that’s got to be waiting in the wings since the band’s origins back 2012.

Spring King are prolific tourers, having just finished a nine date run in February earlier this year, and another 34 dates back in October and November 2015 supporting Spector and Slaves. The May tour will see ten more shows being added to the tally as they continue their march on the country’s eardrums, taking in Liverpool, Brighton, London and Oxford along the way. You can see all of the headline gigs below.

You can also take a listen to the new single in the music video below with its simple “band plays song” style to get a glimpse at what they’re like live. However, you might want to look away for the final ten seconds or so, as it’s too difficult to tell whether it’s meant to be a drum induced happy ending, fatigue or bad acting.

That aside, it starts out with a stylish beat and bass note intro that breaks into the harder rocking punk drive of the track. The chorus is heavily hooked, fired on by the pound of drums and over-driven electric rhythm guitar. It mixes things up with keys where it needs them and overshadows it all with a good mix of echoing reverb and punch crunch.

For anyone that has missed out on the sonic assault of Spring King up until now, the band is fronted by drummer, Tarek Musa, which is no mean feat when playing live. There aren’t that many examples of bands where the drummer is also the lead singer and the songwriter – Arcane Parade are the only one we’ve seen pull this off – but then the band is far from conventional with it’s rough cut recording style that favours speed and intensity over excessive production values. Although, that’s not to say that the end result is anything other than high on quality.

The band is building an impressive reputation and the sheer volume of gigs on the roster only adds to the credibility, along with the strength of Rectifier and the rest of the back catalogue. Now all that remains to be seen is an epic debut album to cap off what has been a very shiny arrival on the music scene, having also launched Apple’s radio station, Beats 1, thanks to a Zane Lowe opening track decision.

Share the details for Spring King’s May 2016 tour dates with: