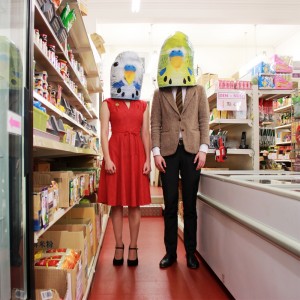 Blitz-pop specialists Curxes have returned with new single, Avant-Guarded, following an 8 month break since the self-release of debut singles, Haunted Gold and Spectre and from the first few spins it’s a similar kick to the grey cells as Sleigh Bells achieved with Tell ‘Em. Punchy and filled with crunching beats it’s a cool new track that does well to further highlight Curxes’ potential, especially when you watch the surreal brilliance of the music video they’ve put out to accompany it.

Curxes (pronounced kurs-iz) are picking up an impressive reputation on the back of their relatively small number of releases and Avant-Guarded does a lot to add to the early radar pings that have them up there as one of the bands to watch for 2014. It blitzes without being too try-hard, making it a casual smack of vocal, synth and noise excellence. While it doesn’t always burn as brightly as it does at its best it’s still an epic track for a band so early in their formation.

It starts out with psych noise-pop synth siren insanity that quickly moves into the catchy vocals and blitz mix of sounds that makes the single such an attack of a track. There’s a full force series of drum sequences to bring a lot of pace to the track and while there’s a couple of downturns in the breakdown and wrong moves in vocal inflection it picks up well enough in the chorus to bring things back around.

There’s a cool psych freak out towards the end to look forward to, before coming back to the full mirror headbanging chorus.

The video is brilliantly surreal with budgie headed people messing around in random places like the supermarket or a greasy spoon cafe mixed in with Dada infused animation. It’s like Yellow Submarine and Another Brick In The Wall meets The Mighty Boosh and a budgerigar equivalent of BraveStarr. It’s well worth watching as attentively as possible, because there’s a fair few witty jokes to look out for. It was directed by Rob Luckins and animated by Roberta Fidora & Rob Luckins – all of whom deserve a pat on the back and a fresh chunk of cuttle fish.

Avant-Guarded is out now from all good book shops, as well as any pet stores near you. It’s available for digital download or as a little note in the foot tube of a military pigeon.

Curxes are made up of a white budgerigar called Roberta Fidora and one of those weird yellowy-green ones called Macaulay Hopwood who apparently share their time in Brighton and Portsmouth making beautiful blitz pop music together.